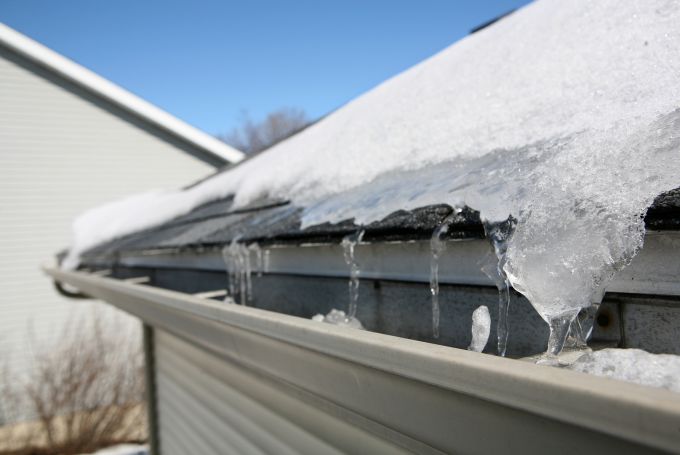 If you live in Milwaukee Wisconsin or anywhere nearby, you know that snow, ice and cold temperatures are a seasonal reality. Though we sometimes might curse the cold and snow for interfering with our drive to and from work, it can cause some problems with our homes, too. Where there is significant snowfall, ice dams can follow.

What Is an Ice Dam?

When ice stops melted snow from safely flowing off the roof, it is known as an ice dam. Just like a dam on a river or a lake, the ice holds back a reservoir of water, which will eventually freeze when temperatures drop again. This refreezing results in a larger dam that can stop even more water from flowing to the ground. Because of this, the water could end up seeping into your home instead, causing damage and mold to your walls, attic, insulation and more.  As if that weren’t enough, the weight of the ice can grow so great, part of the roof could collapse.

Have a Question? Give Us a Call!

How Does Insurance Help?

If your home is damaged by an ice dam, your homeowners insurance policy will likely cover the costs associated with repairs to the interior, exterior and structure. Additionally, if the ice dam that caused the damage is still present, the policy may also cover its removal. If there is an ice dam on your home and it has not yet caused damage, insurance views it as the responsibility of the homeowner to remove it or have it removed.

How Can I Remove and Prevent Ice Dams?

It’s much easier to prevent ice dams before they happen, than to have them removed later on. Fortunately, ice dams and the destruction they cause can mostly be avoided by taking a few precautions:

If you weren’t as proactive as you should have been, and an ice dam does form, it’s best to remove it as soon as possible to ward off potential damage. Begin by removing the snow from your eaves with a roof rake or shovel, or hire a professional to do it for you if you’re not up to the task. Keep in mind that it’s dangerous to climb upon an icy roof, so if you’re not up to the challenge, opt to have it hired out. Once cleared, the roof may warm up enough to melt the dam itself. If not, If not, you may need to lightly chip away at the ice, and apply some “ice melt”, to open up a channel for the melting snow to escape.

When you think disasters that can happen to your home, you probably don’t think about slow growing ice as being a problem. However, ice dams can be just as damaging as a violent storm. Ensure you have the proper insurance coverage, be vigilant with your prevention efforts, and remove an ice dam swiftly if you spot one. You could just save yourself a lot of work and frustration in the end.

Kevin Smith is an agent at Smith Insurance and Financial, Inc. in Big Bend Wisconsin. Kevin can be reached at kevin@smithinsurancewi.com

Thanks For The Reviews!

I have dealt with Mike for about 25 years and could not be more impressed with his professionalism' attitude and attention to detail.You truly can't do better than to be represented by his Agency

Steven K.
21:39 21 Oct 19
I was with my previous insurance company for many years. After getting a quote from Kevin I was able to save a considerable amount of money. Kevin is always available to answer my questions in an efficient and timely manner. I would highly recommend Smith Insurance & Financial Services.

Heidi N.
16:24 15 May 19
I was with my previous insurance company for many years. After getting a quote from Kevin I was able to save a considerable amount of money. Kevin is always available to answer my questions in an efficient and timely manner. I would highly recommend Smith Insurance & Financial Services.

Heidi Ferstadt Netzel H.
16:21 15 May 19
After being with my other insurance agency for over 15 years I recently switched over to Smith Insurance. Kevin noticed that my previous insurer didn't have the proper coverage I needed. He was able to get me the best insurance for my house and vehicles at a great price. It has been so easy and stress free working with Kevin. Any questions I had were answered in a timely manner. Smith Insurance handles my entire family

Andrew F
16:03 15 May 19
I have been with Smith Insurance for over 20 years and have had a lot of companies try to get me to move. You will get no better service or prices anywhere else. He is the only one that ever called back right away when I had an accident. Try them you wont regret it.

Rick D.
21:05 04 Dec 18
i have been with Smith Insurance for years. Very helpful, supportive and on top of things. Highly recommend.

RON W.
10:54 20 Sep 18
Mike and Kevin are awesome at making sure you have what you need, and not trying to push the unnecessary things. We have had Smith Insurance for 15 years, and just feel like we're old friends instead of a business relationship.

rebekah C.
20:31 18 Sep 18
This is an amazing agency! Have worked with them for many years. They always help with any questions we have, personal or business related. The response time is amazing.

Skip M.
13:51 26 Jul 18
Mike and Kevin are honestly the best! Whenever I have questions about coverage or most recently with a claim situation, they were very supportive and helpful in my questions answered either over the phone or in person at the office! I can’t thank them enough for everything and their customer service is excellent!!! Keep up the great work guys, and the rest of the team!!

Sara Jo R.
19:38 25 Jul 18
Smith Insurance has always given a full review of insurances available to me, the costs and the reason of perhaps not choosing the cheapest. I was referred by my daughter and have referred my brother and others. Father and son have been thorough and respond quickly.

Linda P.
02:22 24 Apr 18
Mike has been my agent for 24+ years. Handles everything with just a phone call. Awesome customer service. Highly recommend to anyone

Jena C.
18:00 20 Apr 18
Mike has been our agent for 24+ years. I have sent my parents to him and tell everyone I can as well. Always handles everything with just a phone call. Would recommend to him very highly

Jena Jones C.
17:59 20 Apr 18
I have been with Mike for 20 years or so. Always took great care of all my insurance needs. Recommend Smith Insurance very highly!

Tom K.
19:07 24 Mar 18
All the people at Smith Insurance are friendly reliable people. They excersize phenomenal customer service and treat you like a person not a number. I've been with them for a couple years now and they have never let me down or pointed me in the wrong direction. They are very professional and knowledgeable in there trade and I would recommend them to anyone looking to purchase insurance and have in the past. Thanks guys for all the wonderful work and service you have done for myself and others.

Ryan A.
16:36 22 Feb 18
I needed a ride home after dropping my car off at the body shop and Mike Smith graciously picked me up and took me home. You don't find that kind of service anymore. I truly appreciate him offering and following through with it. Thanks so much Mike. He is always available when we have questions and is extremely helpful. Highly recommend Smith Insurance.

Nina B.
20:17 19 Feb 18
We have had Smith Insurance for at least 15 years and they have always had great service. I have looked at other insurance companies, but none of them could beat their price. We look forward to many more years of great service from some true professionals.

Robert H.
19:04 21 Dec 17
Love the personalized service they provide with competitive rates. Prior to this I used one of those "easy" online providers and would never go back. Smith Insurance has given me better rates and the comfort of knowing they are easy to get a hold of and personally care about their customers.

Nicole L.
18:41 16 Nov 17
I called around multiple insurance companies, Smith Insurance gave me the best quote for my rental properties. They were super easy to deal with, great communication, and replied back in emails fast. Thanks Guys

Pete R.
19:55 31 Oct 17
Mike has helped us greatly in the past 15 years with them. they are fast and very good at what they do and take there time in talking with us. We appreciate all the help mike has given us.

Joseph N.
20:23 21 Sep 17
RESPONDS QUICKLY (EVEN ON WEEKENDS), TAKES CARE OF EVERYTHING. EXPLAINS THINGS WELL TO THE "LAYMAN". GOOD STUFF. KEVIN IS AWESOME.

Mackenzie S.
14:39 15 Aug 17
Joe has been amazing in helping us get coverage for both our personal and business needs. He proposed many options, discussed the pros and cons of each and made filling out all the paperwork extremely easy! I would definitely recommend working with this company.

Cindy Z.
14:21 15 Aug 17
mike has been our ins provider for over 20 years. we have sent many friends his way and they always end up going with his company.always calls you back, one thing I like.

Arnie B.
21:31 17 Mar 17
We have been with Mike for many years and have insured motorcycles, cars and houses. Mike has been there during working hours, after hours, weekends and holidays, I could not ask for more! He is very attentive to our needs and will work with our best interests in mind after learning what we need. Smith insurance is the embodiment of customer service and has earned my loyalty and business. Even though you see advertisements for other insurance companies, Smith insurance offers what the other companies don't...the ability to talk to a person who knows you and will do whatever it takes to file a claim and follow up with it. That is a great piece of mind knowing you can speak to someone when you really need them.

Dan R.
03:28 23 Dec 16
Everyone at Smith indsurance has been very helpful with every question I have had. They have all been there for me. Honest and trustworthy!! Thank you

David Z.
04:17 29 Nov 16
We have been insured with Mike Smith for decades. We even kept him when we moved up north. His agency is very attentive to changes and claims are handled fast and very fair. Highly recommended!!!!!!!!

Dylan K.
16:26 18 Nov 16
Have had Smith Insurance for over 15 years now, both personal and Business. If we had any problems Mike was always there week days or weekends. Leave a message, he always called right back. When my husband became ill and we had to scale back our policy, he was so helpful. I wouldn't have any other insurance ever. Thanks Mike Smith

Patti Shaffer O.
00:14 04 Jul 15
Smith Insurance has provided insurance coverage for both my personal and business needs since the late 90's. The detail work has proven to be unmatched. The response time for policy changes is spot on and immediate in nature. Mike has always been very acessible to address my needs. On the few occasions claims had to be submitted, Mike has always been very involved and detail oriented. Timothy Schuetz,President,Automotive Parts & Equipment Corp.